In the land where bluegrass thrives, hundreds of thousands of people plus 20 prominent horses are soaking in the 144th running of the Kentucky Derby. A magnitude of people are also throwing back a cold one to celebrate Cinco de Mayo.

At the Bichler ranch, we're a lively bunch. Doug and Amelia are napping.

Any year prior to now, Doug would be working today. He'd be at another producer's ranch either synchronizing their cowherd for breeding or performing artificial insemination, or both. He would have tapped the derby in order to watch the race at a later time. He would have missed all the TV coverage even though he enjoys watching the Kentucky Derby festivities.

But, today he simply had to feed our cattle their daily ration and complete various chores. Days like today remind us of how life has slowed down for him and I. Days have become more simple. Because of Doug not having his right arm and hand, he can no longer A.I.; at least not until he receives his prosthetic and maybe then he can retrain himself to A.I. once again. Because of Amelia, Doug and I are not attending a party to relish in mint juleps. We are not eating our weight in guacamole. We are inside, parked in the living room with a frozen pizza in the oven. Because sometimes the greatest joys in life are not the events you attend, the designer clothes on your back or the gourmet food in your hand. Sometimes the greatest moments in life are sitting across from the people you love. Because, some day something may happen where you realize you were minutes from never having that person in your life again. 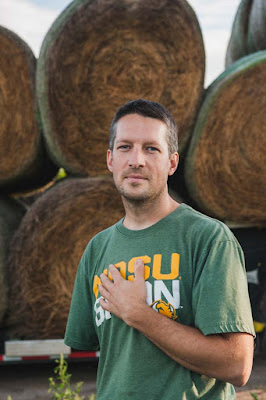